Humpback whales leave the cold waters of the far South (Antarctica and southern sea sanctuary), and migrate to the warmer waters of the Pacific of Panama. Each year, several thousands are coming to Panama in order to mate or give birth. Welcome to Coiba National Park and the North East Pacific Corridor, considered one of the best places in the world to observe Humpback whales between July and November.

Humpback whales from the North Pacific also migrate down to Panama during the months of February to April.

Check our whale watching expeditions and reserve your date here.

Due to commercial whaling operations Humpback whales would be extinct if hunting them had not been banned in 1963. Plastics in the ocean have become a big threat as these creatures often inadvertently ingest plastic, and die a slow death

It is estimated that there are approximately 10,000 to 15,000 Humpback whales world-wide. Humpback whales are classified as an endangered species specifically protected under the Wildlife Conservation, and Marine Mammal Protection Acts. Unfortunately some countries are not complying with these acts, so organizations such as Sea Shepherd, have to intervene and prevent such disrespect of international whale conservation acts and agreements.

How can you make a difference? 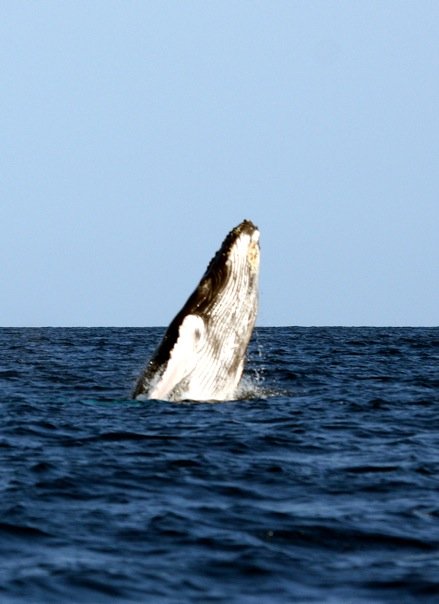 Humpbacks whales have been known to congregate in large groups near to land, humpback whales have a distinctive body shape, boasting long pectoral fins and a gnarled head. Humpback whales get their name from their tendency of raising and bending in the back in preparation of a dive.

Humpback whales are well known for breaching (leaping out of the water), their two unusually long fins and their complex whale song

Humpback whales breathe air at the surface of the water through their two blowholes located near the top of their heads. When they exhale upon surfacing they spray the water out of the blowholes at 200 mph which vaporizes and can rise between 3 – 4 meters) in the air.

Humpbacks are of the family of baleen whales which, instead of teeth have 270-400 baleen plates which hang from the top jaw. They filter their food through baleen plates. They consume krill, anchovies, cod, sardines, mackerel, capelin, and others sorts of schooling fish.  Humpbacks whales can consume nearly one ton of food each day.

They are only in their winter feeding grounds for four months of the year so they live off their blubber for the rest of the year.

Humpbacks travel in large, loose groups known as pods. They can dive for up to 30 minutes, but usually surface after 15 minutes. They can dive to a depth of 150-210 meters. When in a playful mood, humpbacks may put on spectacular displays of breaching, rolling, ‘spyhopping’ (poking their head out of the water for up to 30 seconds to take a look around), ‘lobtailing’ (sticking their tail out of the water into the air, swinging it around, and then slapping it on the water’s surface)

Humpback whales breeding and caring for their young

Humpback whales are probably old enough to mate at about 7 years of age.  After a 12 month pregnancy, calves are born five meters (16 feet) long and weighing approximately one ton. Humpback whales get pregnant approximately every two to four years. Sometimes they mate in the same season that they gave birth Females nurse their new born calves in warm, shallow water of the Pacific coast of Panama. During their stay, the calves will buid up a thick enough layer of fat for their journey back to the cold water and feeding grounds. It is a real pleasure and a thrill to see Mother playing with her ​​offspring.

The songs of Humpback whales

During the breeding season, the Humpback males are known for singing the longest and most complex songs in the animal kingdom. Only males have been recorded singing, and only in warm water where they breed.

Humpback whales are our friends

Whales are the largest animals on earth and although they seem to be pretty smart and aware, they do not seem to be vindictive. Even after many years of people hunting and killing them, it is extremely rare that they attack or defend themselves against whalers. In fact, like dolphins, whales have been known to actually help lost ships and guide them to safety.

The five largest whales in the world

The Blue whale is considered not only the largest whale but also the largest animal on Earth. Endangered since the 1960s, there are said to be only 5,000-12,000 blue whales left in the world. Weight 150 tons Size 25-30M

The Finback whale at an average weight of 80 tons and average size 30M. Endangered species 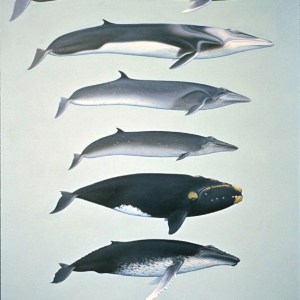 of 20M. Deriving its name from early whalers who coined these the ‘right’ whales to kill, the right whale is our third largest whale. With a large bulbous head covered in callosities, whale barnacles, worms, andwhale lace.

Sperm Whales: The sperm whale gets its name from the waxy liquid (or spermaceti) found in its gigantic head. Measuring up to 67 feet in length and weighing nearly 60 tons, the sperm whale is the deepest diving mammal and has the largest brain of any animal on Earth. Sperm whales like to feed on giant squid and males can typically be found in Antarctic waters.

BowHead whale: Related to the right whale, bowhead whales can reach up to 66 feet in length and weigh nearly 74 tons. A slow swimmer and popular whaling target, there are said to be only 24,000 left in the world.

Check our whale watching expeditions and reserve your date here.