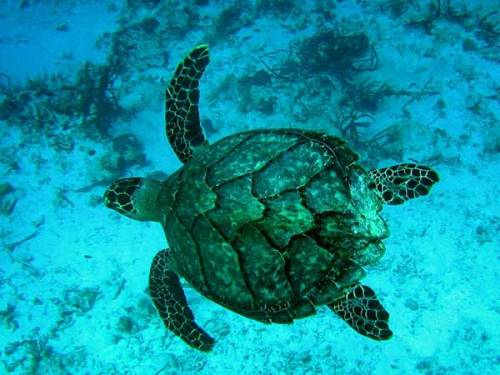 Hawksbill – Named for its narrow head and hawk-like beak.

Where To Find Them:

Hawksbills are mostly found in the tropical and subtropical waters of the Atlantic, Pacific, and Indian Oceans. The Hawksbill’s narrow head and beak-shaped jaws allow it to get food from crevices in coral reefs. They eat sponges, anemones, squid and shrimp.
Hawksbills are typically found around coastal reefs, rocky areas, estuaries and lagoons. They nest at intervals of 2-4 years and usually nest between 3-6 times per season. An adult female will usually lay an average of 160 eggs per nest, these eggs will incubate for a period of about 60 days.

How to Spot Them:

The Hawksbill is among the smallest in the sea turtle family. Its head is narrow, has two pairs of scales in front of its eyes and a serrated jaw. An adult Hawksbill typically weigh 100-155 pounds (46-70 kg.) and measures 2.5-3 feet (71-89 cm) in length.
The shell of the Hawksbill is elliptical in shape and its flippers each have two claws. Its shell is typically orange, brown, or yellow, while the shells of hatchlings are mostly brown with pale blotches on their scales.

Hawksbill sea turtles are listed as Endangered (in danger of extinction within the foreseeable future) in the U.S. and Critically Endangered (facing an extremely high risk of extinction in the wild in the immediate future) internationally. The greatest threat to the Hawksbill sea turtle is hunting for their prized shell, often referred to as “tortoise shell.” In some countries the shell is still used to make hair ornaments, jewelry, and other decorative items.

Not long ago, most researchers thought hawksbills had been eliminated from the eastern Pacific Ocean. Recent discoveries and new projects have changed the conservation outlook for this endangered species and inspired hope for its recovery. Of all the sea turtle conservation issues, the protection of Hawksbills in the eastern Pacific is one of the most pressing. The current low nesting numbers indicate that the turtle species is unlikely to survive without outside action and conservation efforts.

We are working to bring more awareness to the current plight of the Hawksbill by organizing beach patrols to protect eggs and ward off poachers, tracking sightings of the turtles in our partnership with Sea Turtle Conservancy, as well as teaching the PADI Project AWARE Sea Turtle Awareness Distinct Specialty Course to those who join us in our programs and expeditions. With your help, we are striving to bring the Hawksbill back from the brink of extinction.