A short narrative by our team leader

I was swinging gently in the hammock beneath the mango tree , watching the grass grow and listening to music when I noticed Adrian had his boots on, and was holding a machete in his hand with a purposeful look on his face. I took my headphones out and asked what he was up to “I’m going to go and climb the mountain” he said.

We were on the little known island of Gobernadora, a neighbour of the much larger and slightly better known Cebaco island, which we had been exploring new trails on the day before.

The Mountain Adrian was referring to was not a mountain of epic proportions or particularly challenging as far as the climb went. The hard part was navigating the many machete made trails that crisscrossed through the islands often dense undergrowth. That and the fact it was nearly midday already and it was Hot, this was an normally an early morning activity. Hold on a minute I said, ill come as well. I grabbed my pack and chucked, in some water, peanuts and a flashlight (just in case) and a compass and we set off. 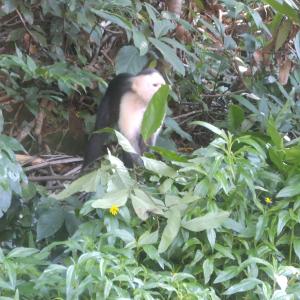 The beginning of the trail was shaded and straight forward relaxed walking, crossing over the small river and passing by the swimming hole we planned on cooling off in upon our return. We stopped to look at the cattle heart butterflies fluttering around in the undergrowth and took out time ducking beneath vines and looking up at the birds surfing above on the thermal waves.

The paths continued to twist and turn and just when they seem to be going up and towards the mountain, where we wanted to be, they would dip down again and take us away from where we thought we should be headed. Occasionally through gaps in the foliage above we could see the mountain and when the paths forked in all directions we took the one which seemed most uphill or towards our last sighting of the mountain.

We came out into a small clearing where a small rancho (cabin) was rotting away and slowly being taken back by nature. Around the dilapidated shack empty rum bottles littered the ground , the garden was full of red, pink and yellow orchids, bananas stems were clustered in one corner and spiky pineapple plants occupied another.

This seem to be a little hidden paradise bar, away from the rest of the island and the village. It had clearly been a while since the last person had been there though and I joked with Adrian that perhaps the wives had found out and put a stop to it.

Pushing through the large leaves and stepping through the twisting vines that seemed determined to trip us up, we came out on the other side of the garden on a trail which we presumed was the same one we had been on before. We carried on chatting away and stopped to take some photos of a Huntsman spider that was perched on the log we were using to cross a stream.

After a while we were aware we only seemed to be going downwards now and when we came out onto the open flank of a mountain we knew we had gone the wrong way, as we now seemed to be making our way down to the other side of the island. Around us now the land was farmed slightly, with rows of Yuka neatly growing and Corn sprouting up side by side.

We decided to continue on regardless of where this path was taking us, along the main river of the island. After three hours we eventually came out in a little bay and there we found a beautiful little house on its own private beach completely isolated from the world.

At the end of the beach where the river met the ocean a man was checking the fish trap he had made with the use of all the plastic bottles that had washed up there. He told us the best way to head back would be to follow the coastline, so we set off down the beach and I noticed that this guy didn’t even have a boat. I wondered when the last time he had left that beach or seen other people, it can’t have been often two strangers came staggering out on his beach.

As we walked it was sad to see that due to how the currents hit this side of the island there was so much plastic pollution spoiling this otherwise pristine environment, with hundreds and hundreds of plastic bottles and other pieces of unnecessary packaging stacked high on the tide line. I decided that at some point Discover Hidden Panama would return by boat and clean that beach that I had now named bottle beach and use the bottles for something productive. 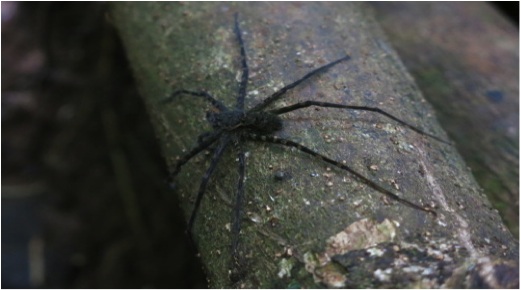 Adrian had been walking is some sensible rubber boots for this journey, I had left mine back on the mainland and instead was wearing like slippers, with my heel sticking out the back, a pair of old abandoned nikeys I had found the year before. They were now disintegrating and my toes were protruding out the end and so we had to stop while I incorporated the shoelaces to also hold together the three layers of shoe.Then we were off again but it was not an easy walk for the next few hours as we clambered up through the solid jungle hacking with our machetes when there was no passable shoreline and then stumbled back down and continued along the jagged rocky shoreline. We stopped for a few water breaks along the way and to take some photos of some rock pools that were a light pink colour on the inside and the limpets there that date back to the era of the dinosaurs.

We probably shouldn’t have as then the rain came in and with it the wind and by the time we made it back to the village just after the sun had set , soaked , muddy, blistered and bleeding . Locals were just about to send out a search party to look for us. We decided later over a cold beer (at the only cantina in town) that while it had been worth doing, this was probably was not a trip to take people on in the future…. hmmm….but why not???

Preparation is always important in all walks and treks. Although Gobernadora island is a small island, it took us over eight hours to cross over to the other side and reach the so called bottle beach, (real name is Camaron beach), and walk back along the coast to reach our final destination. Although we have vast experience in trekking, we really did underestimate this explorative trek. It was fun and quite interesting, One thing that I really was not expecting was when we found a scuba diving cylinder in the middle of nowhere. Old and rusty, but as a dive instructor, I found it very amusing.

Walking along the coast, was very rocky, with small patches of sandy beaches, well not real sand but coarse small rocks and shells. However it gave me the opportunity to observe some interesting Intertidal habitats. Many classes of abalones, especially the commonly named ses snails. turbin snails, limpets, sea urchins and crabs. Chitons or as many people describe them as sea cockroaches, possibly the common chiton or maybe chiton Stokessi, which at first glance seem fossils, but are alive were observed. Something impressive was the light pink colouring of the intertidal pools, probably caused by microscopic marine algae.  So another visit, better prepared is on the cards.

My apologies to Christine, our backup, who was at the point of setting out a search party. We had promised we would be back for (late) dinner……..

An unexpected explorative trek around the island of Gobernadora, Panama.